Product Design & Art Direction
Project Overview
Since 2015, Turbulent has been developing a series of apps for the growing Star Citizen community of more than 2.7 million players.

These products help players connect with each other and with the game developers, browse thousands of lore articles, check their computer performances, and launch the game itself.
Infos
Agency: Turbulent
Client: Cloud Imperium Games
Years: 2015 to 2021 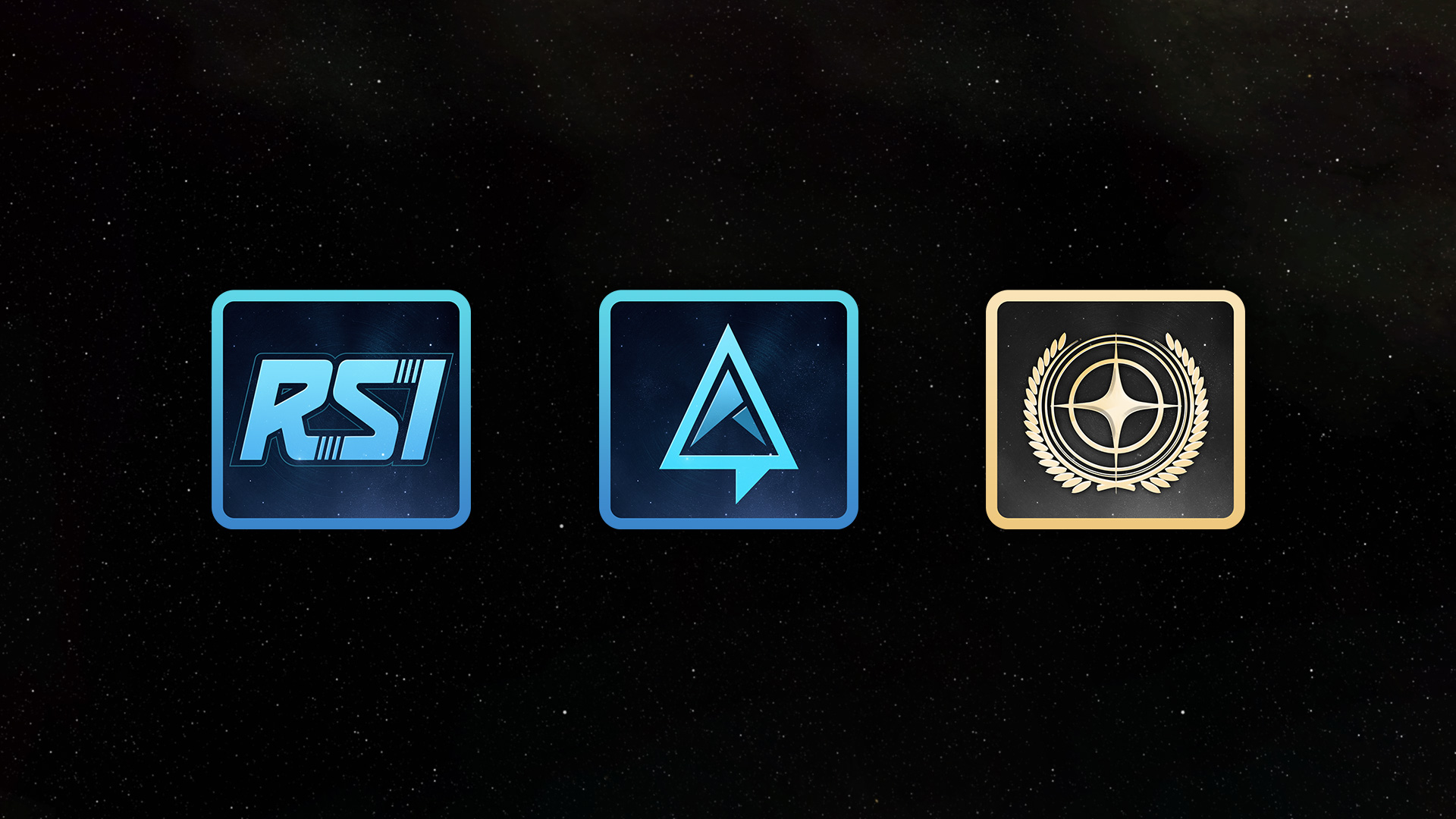 My Contributions
In 2015, I designed the first version of Spectrum's interface, a modern app with chat lobbies and forums to replace the more classic Vanilla forums they already had. As UI lead on the project, I drove the switch from Photoshop to Sketch, and Spectrum was our first experimentation with this tool.

Based on user feedbacks and developer demands, we continually improved Spectrum and created new apps. My first focus was to make these apps highly adaptative so they could be as functional on large gamer monitors as they would be on their smaller smartphone screens.

Our main challenge was to maintain year after year the heart of our sci-fi Art Direction for the entire ecosystem, while still trying to improve the UI to stay modern, relevant and on-trend. I worked in a dynamic user-centered design process with our UX team, even analyzing feedback posted on the forums or Reddit to guide some of our design decisions.

Since 2020, with the growing number of projects and designers in the Turbulent teams, I have led the effort to create UX/UI design guidelines, as well as a robust design system while porting the files into Figma. It includes shared libraries, CSS Tokens, as well as technical and artistic Confluence documentation.

I was also in charge of designing the logotypes of these apps when needed. 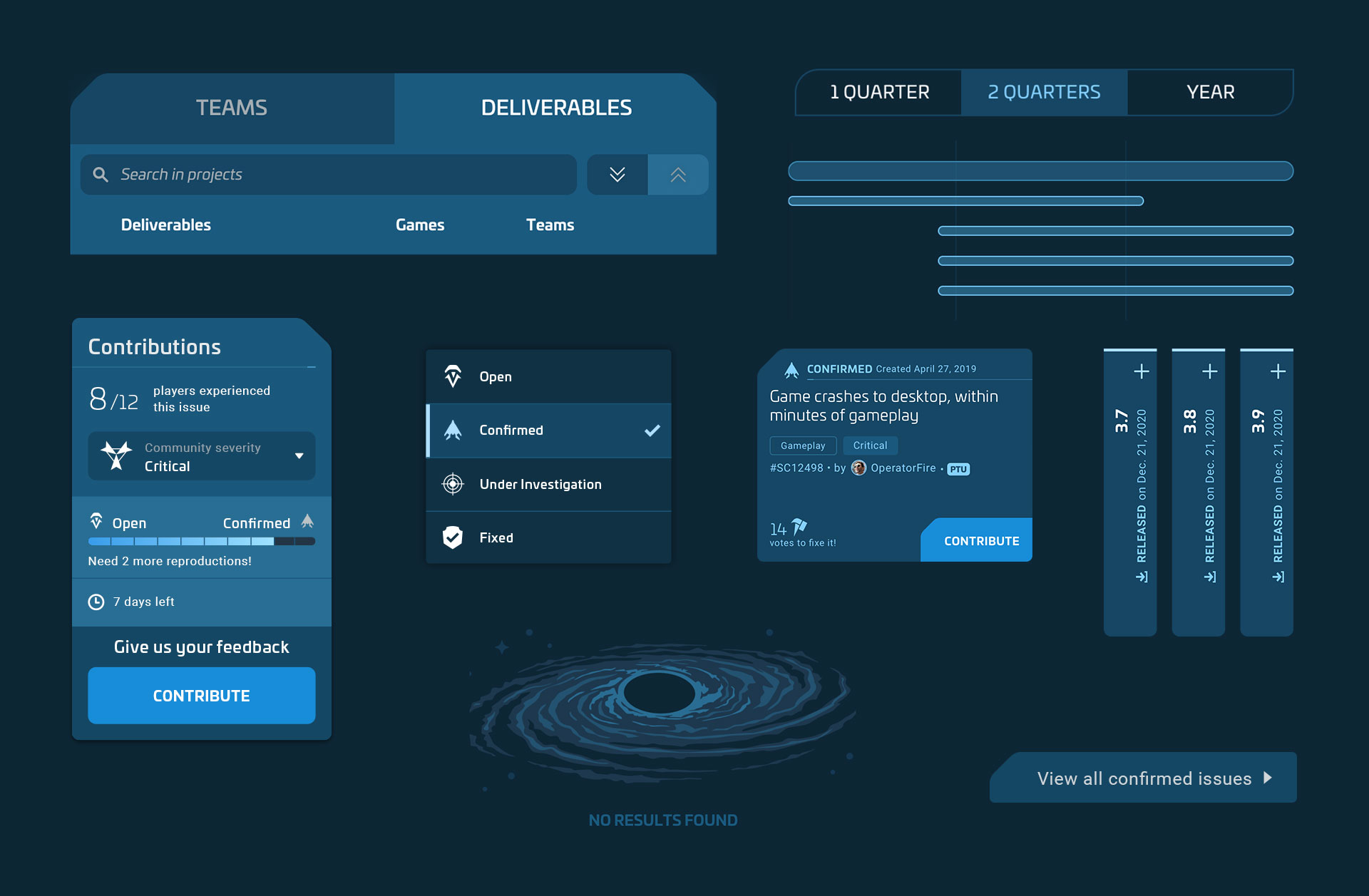 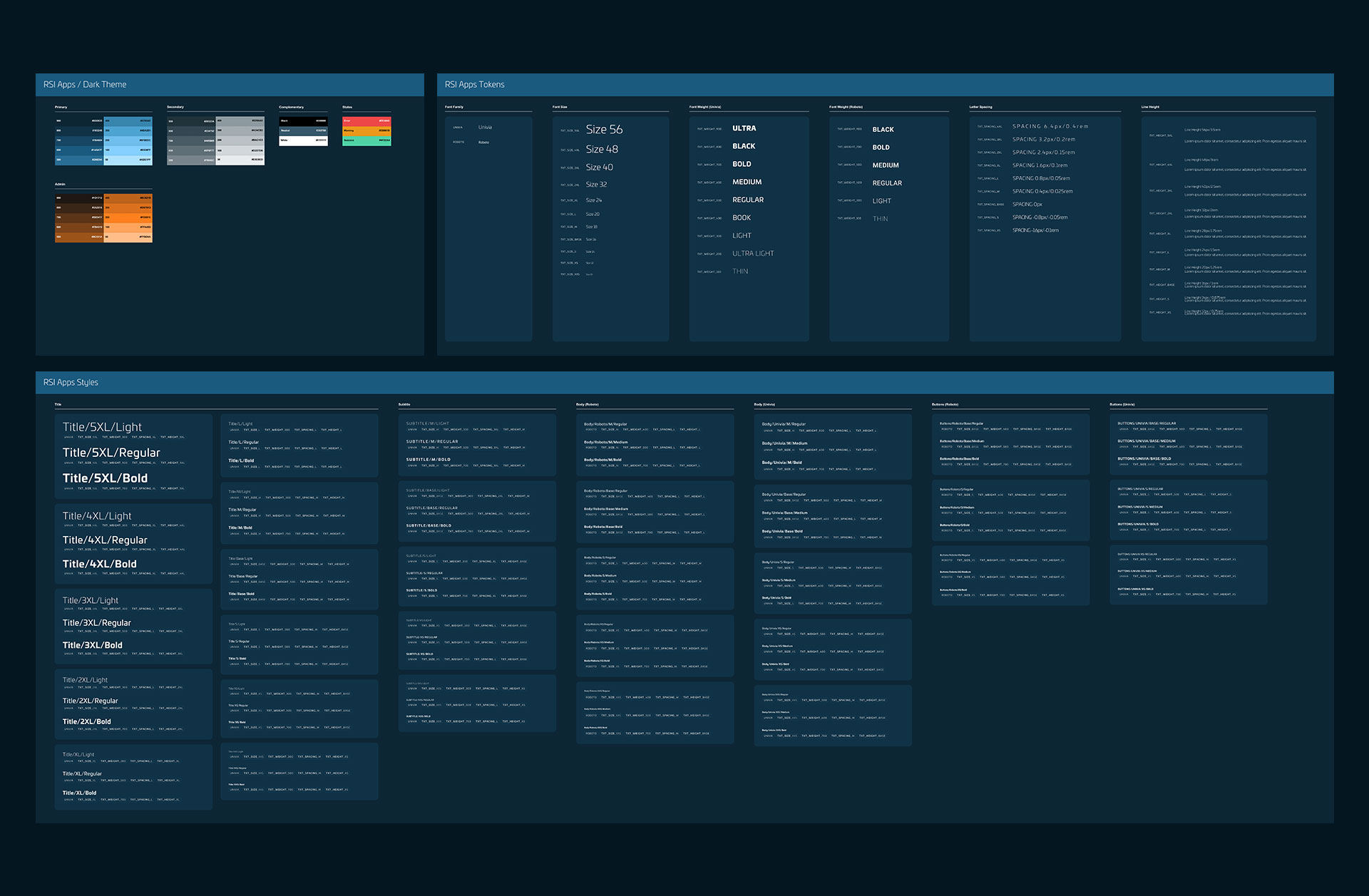 Design System
After several years of designing different projects within the RSI/Star Citizen ecosystem, we decided in 2020 to classify each project, legacy and new, into a limited set of families each with its own design system and documentation. In collaboration with developers, UI and UX designers, I created the first of these which is now the core of all community-based RSI projects. 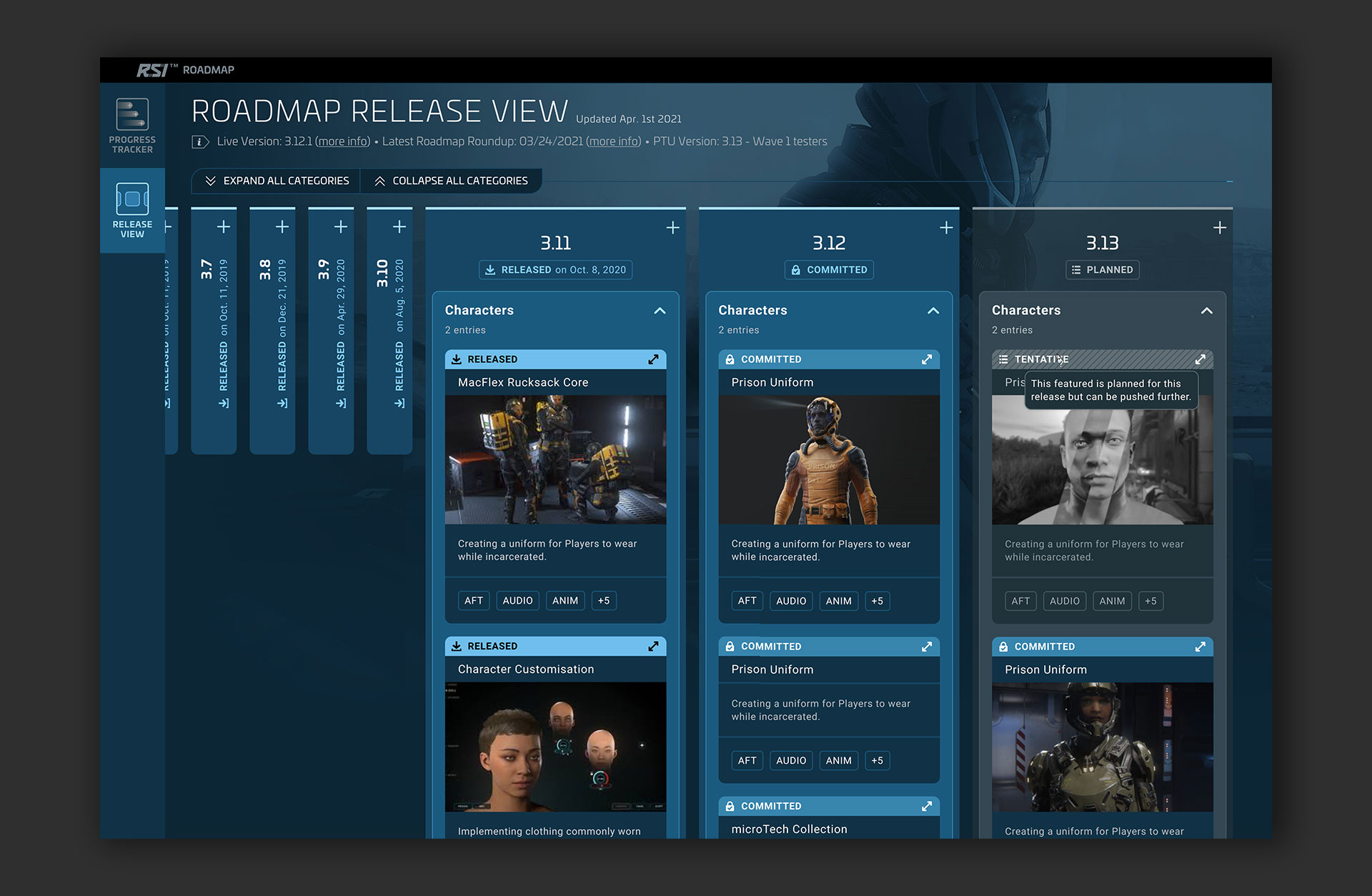 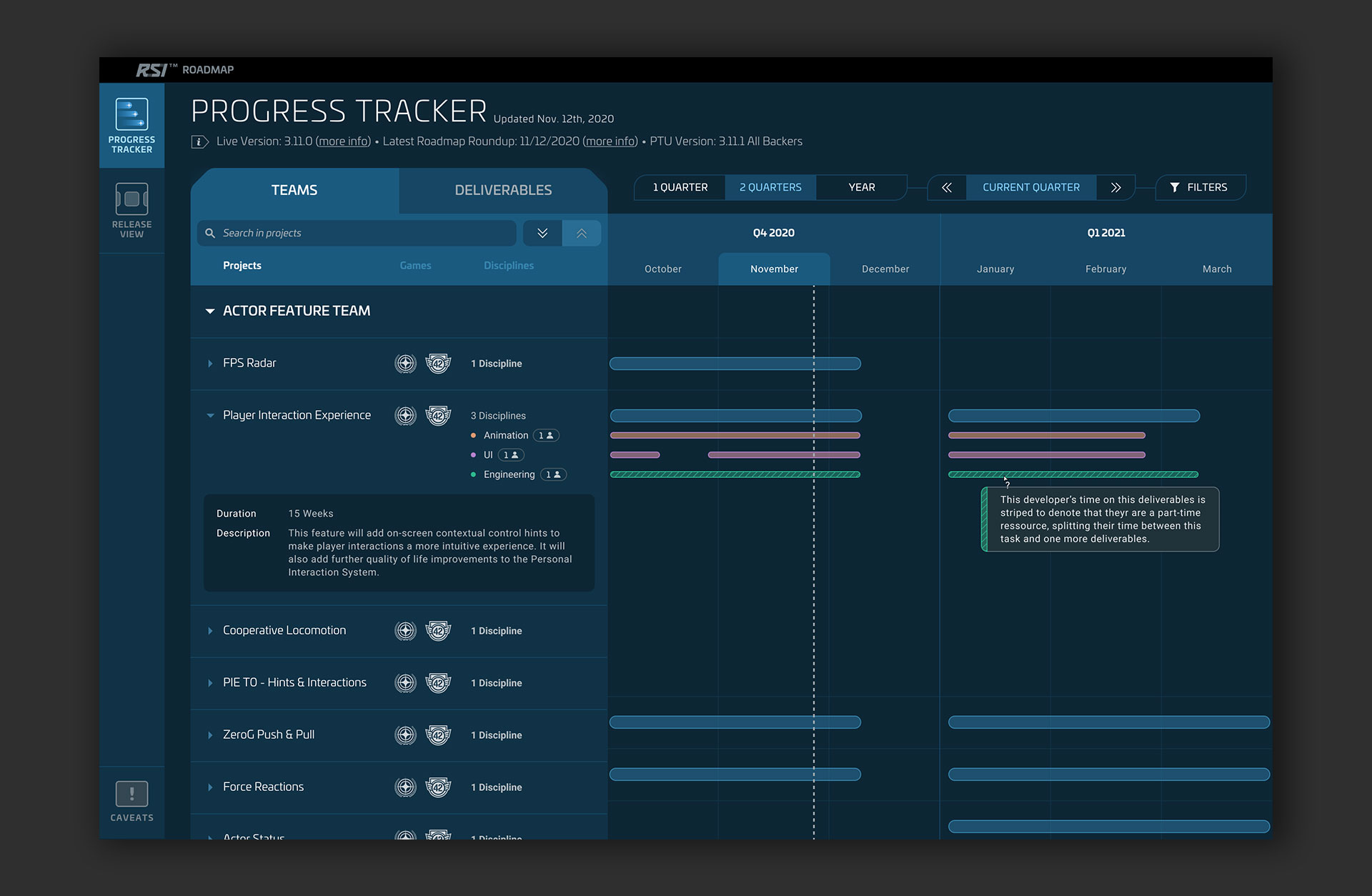 RSI Roadmap
The RSI Roadmap is the most recent app we released on the platform, allowing Star Citizen's players to follow the development teams through their journey creating the game. Communication around the development progress is critical for Cloud Imperium, and a strong request from fans. We followed their insights to build and improve this product. 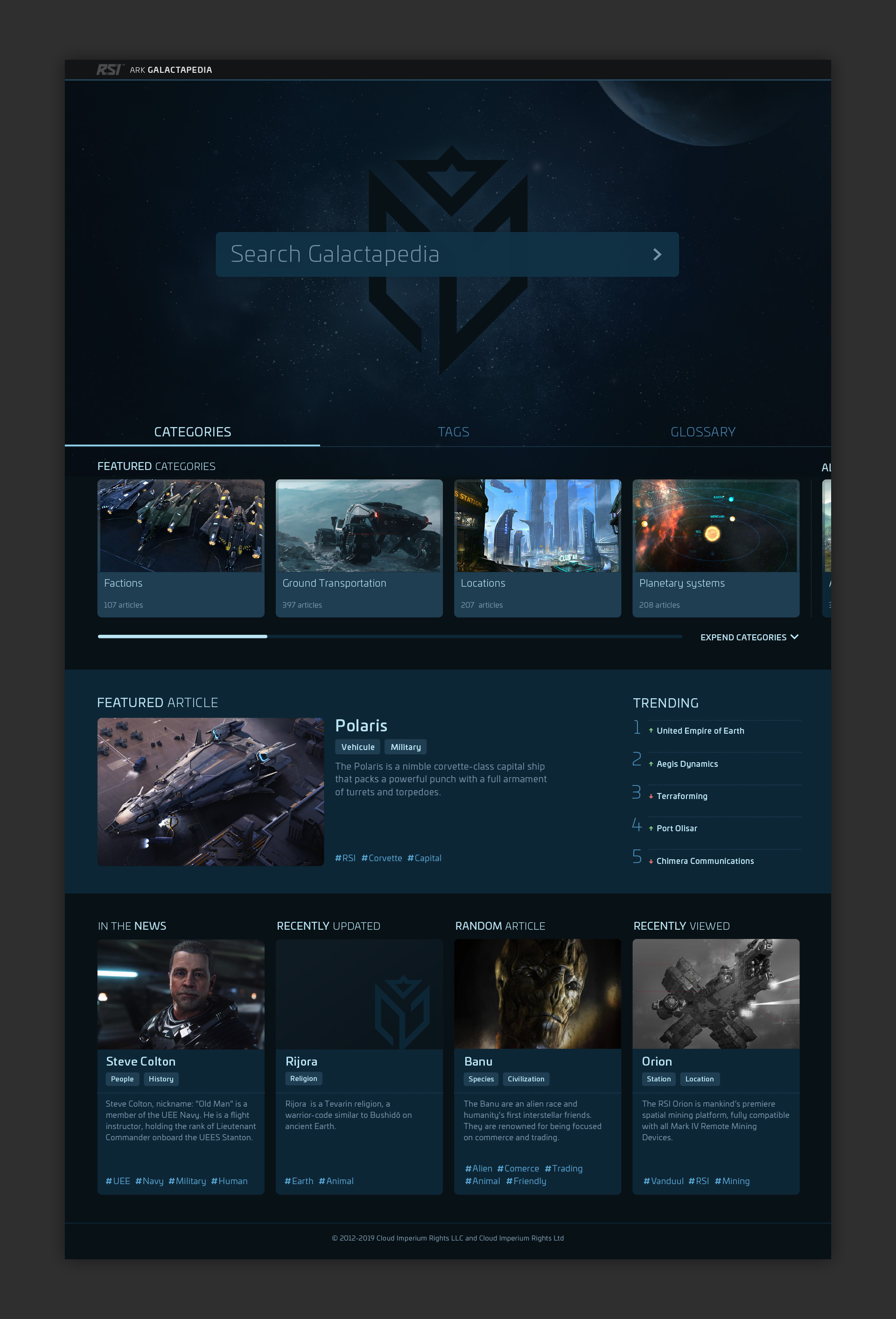 A.R.K. Galactapedia
Galactapedia is an in-fiction encyclopedia of the history of Star Citizen, written by the game's writers. One of the main design goals was to keep the website very light and responsive to be easily browsable by the fans on any device, with the future possibility of a direct in-game integration. 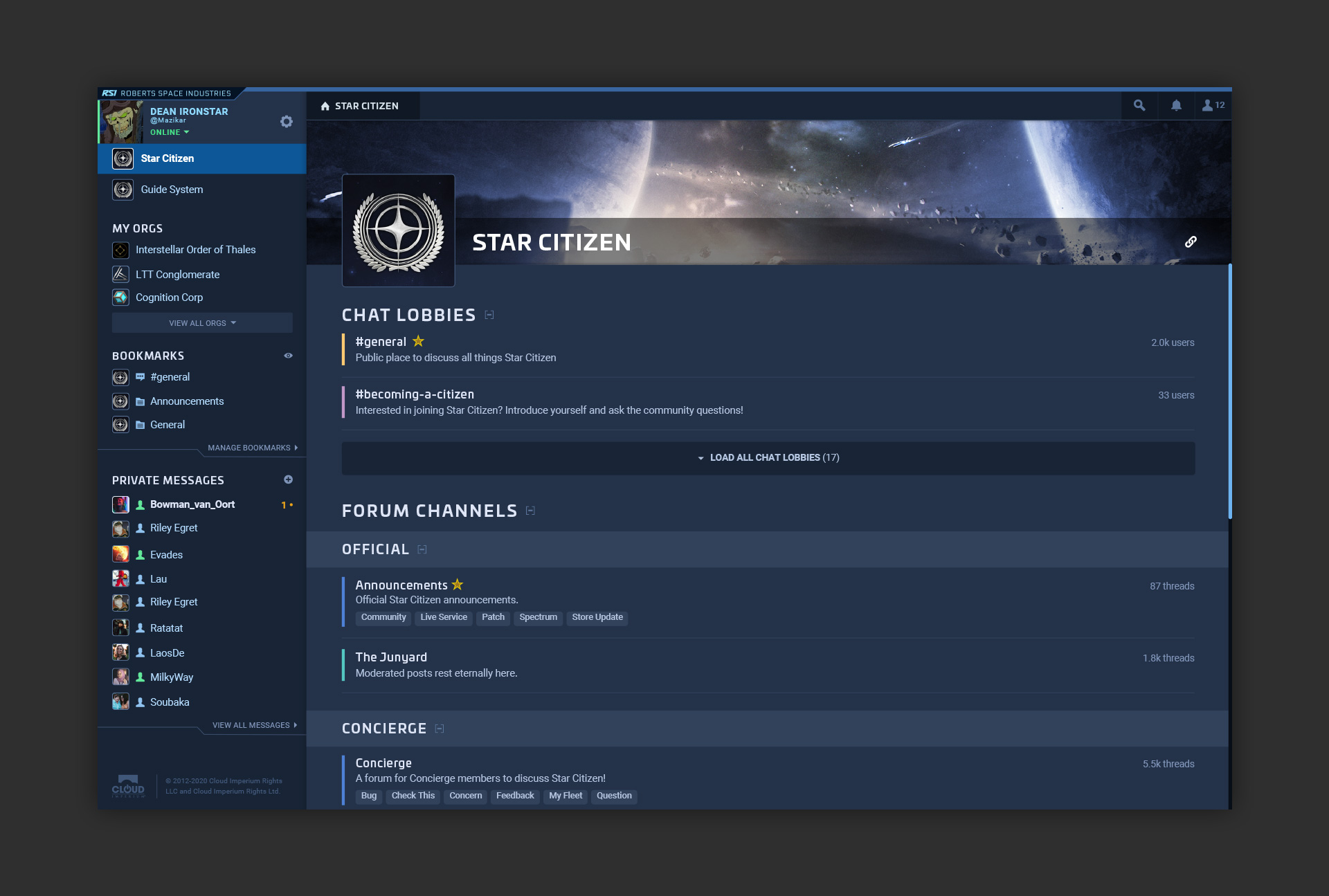 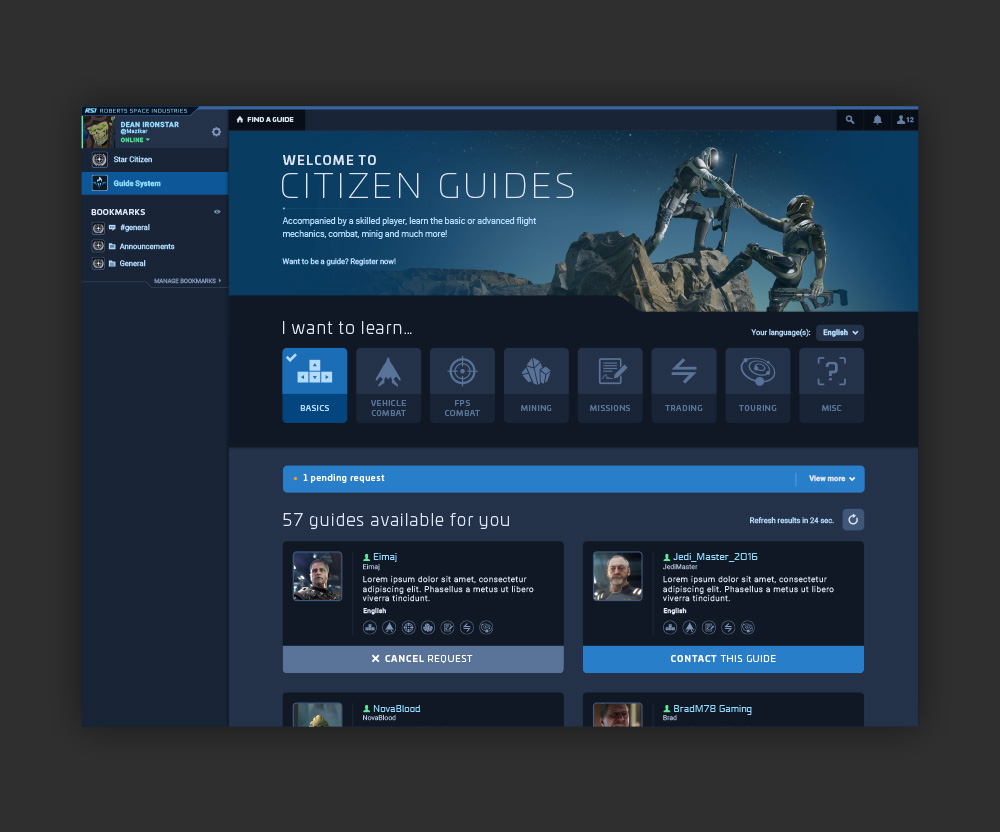 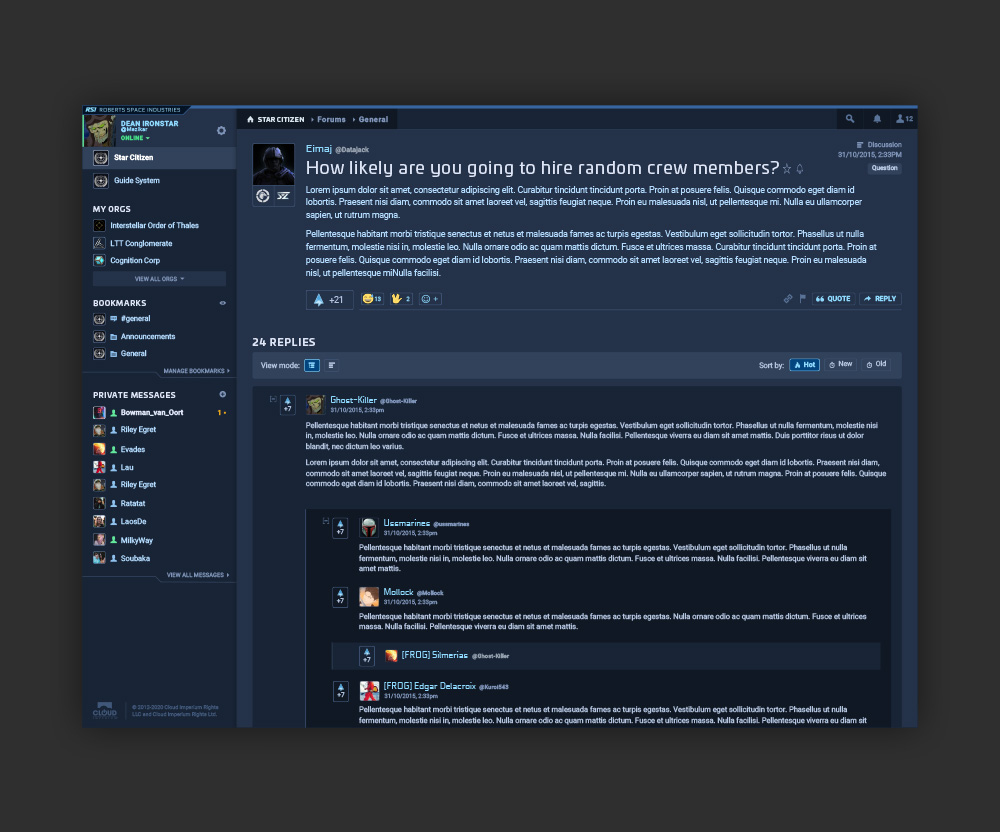 Spectrum
RSI Spectrum is the official platform for the Star Citizen community to interact in private and public forums, chat lobbies, and a guide system to connect new and veteran players. Fun fact: the logotype that I designed for the app is now a feature of the game: Spectrum is the official fictional in-game company that provides the tools for humans to communicate. 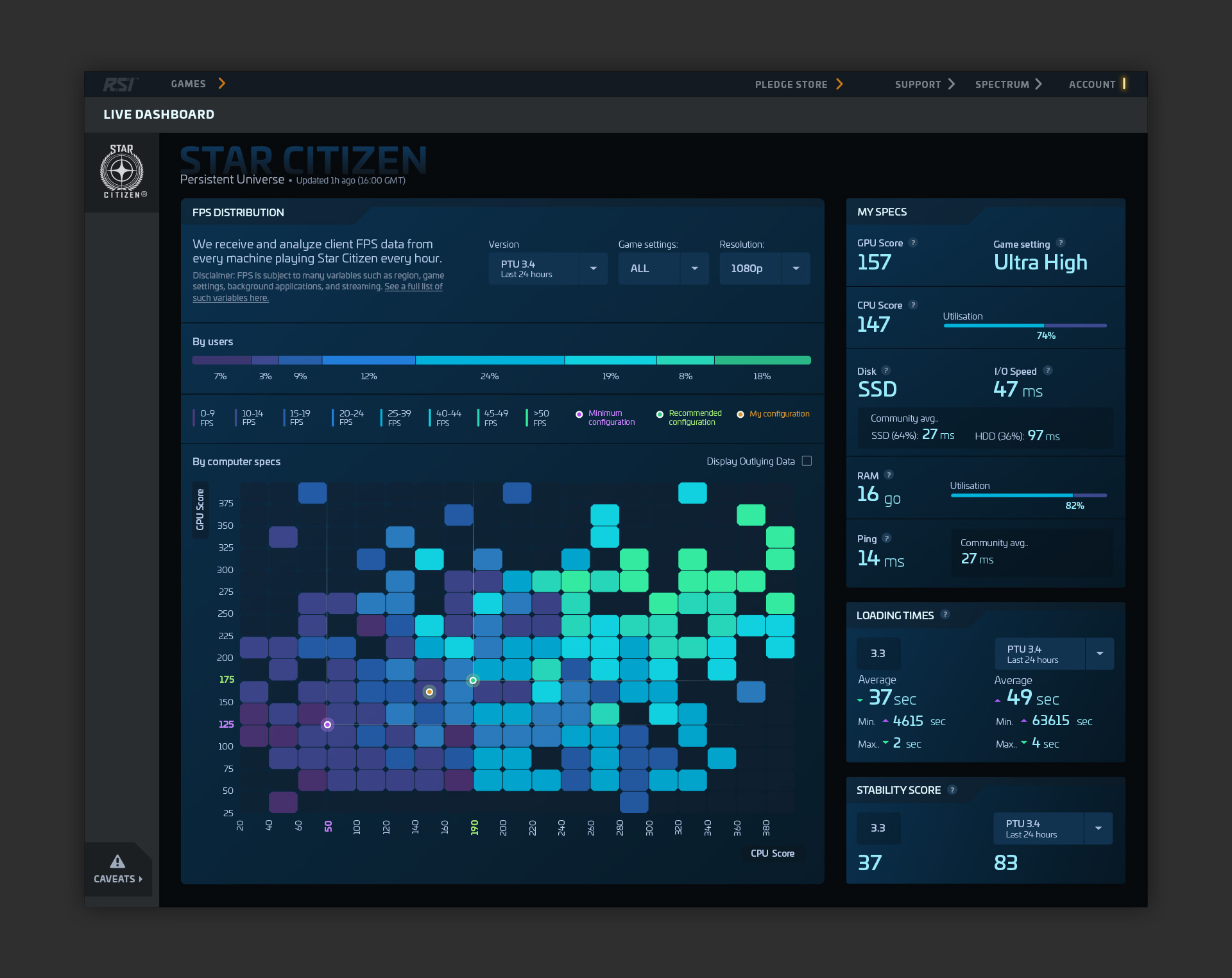 RSI Public Telemetry
With the Telemetry tool, players can check their computer performance and compare them with the rest of the Star Citizen community. They can analyze their stats and the possible impact of upgrading their hardware. With the history functionality, players can also follow the evolution of the game's performance release after release. 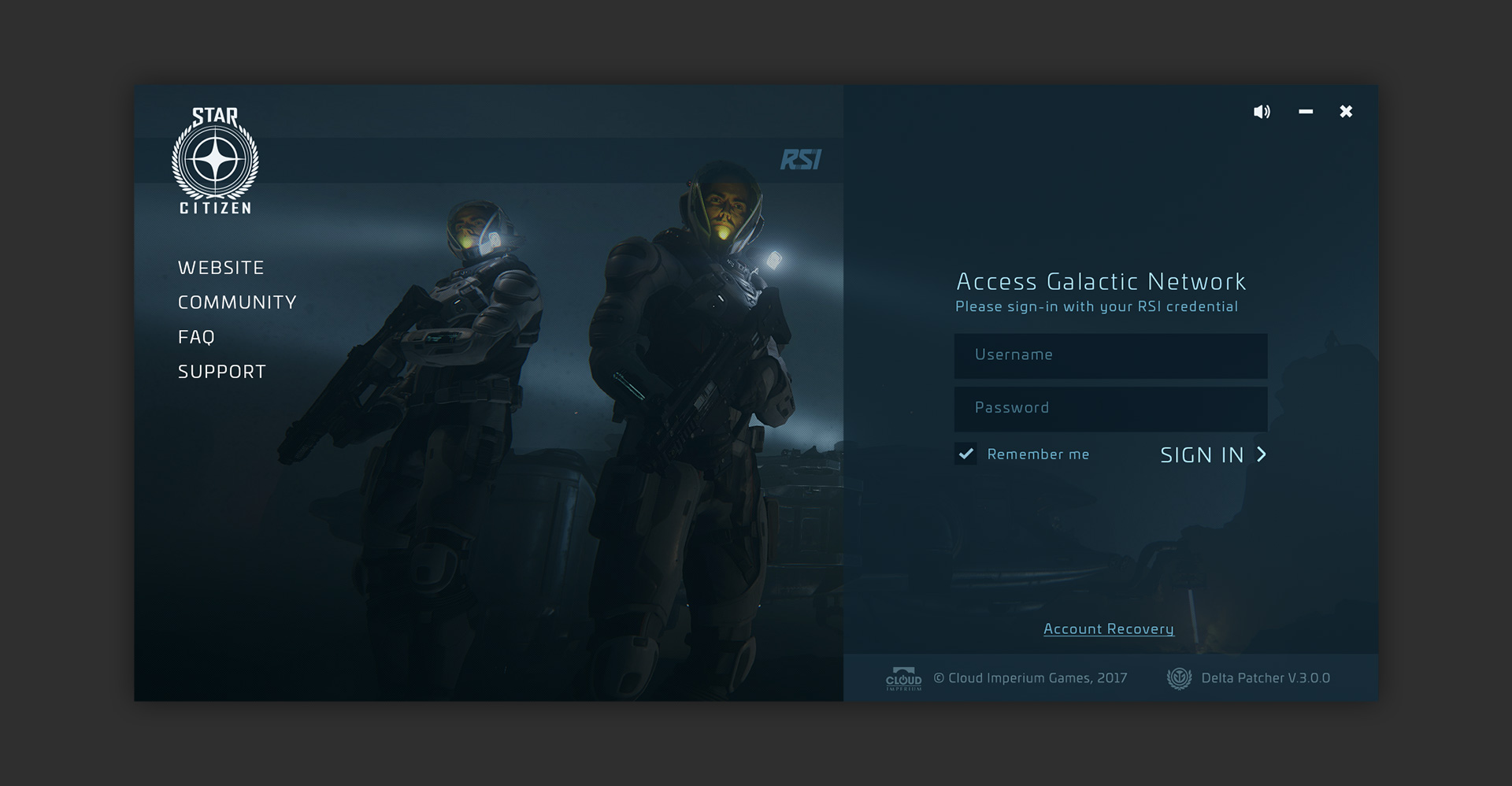 RSI Launcher
The official RSI game launcher is needed to install and update the game, and it features the latest news from the website, as well as a few game settings.
Next project
Star Citizen Stamap